The Archbasilica of Saint Mary Major is the oldest church in the West dedicated to the Blessed Virgin Mary. It houses the relics of the crib of the baby Jesus. It also has the iconic “Maria Salus Populi Romanii” (Protectress/Health of the Roman People). In recent years, Pope Francis has prayed before this image before and after his apostolic travels.

Our last day in Rome has been a very busy one. Among our stops was the Cathedral Archbasilica of Saint John Lateran. The oldest church in Rome, the original structure was dedicated in 324. Saint John Lateran is the cathedral church of the Archdiocese of Rome. As such, it claims the title of “head and mother of all churches of the city (of Rome) and the world”. For centuries it was the residence of the pope, the bishop of Rome.

Towards the end of the pilgrimage, they visited St. Peter’s Basilica…

The Abbey of Monte Cassino – located approximately 80 miles south of Rome – was established in the fifth century from the ruins of an ancient Roman temple by Saint Benedict, known as the father of monasticism in Western Christianity. His twin sister Scholastica followed Benedict’s life of work and prayer (“Ora et Labora”).  Both are buried in the Abbey church.

Today, the pilgrims made a surprise visit to Salerno. Despite the rain, we were able to walk the historic city center where the locals have already begun to hang their Christmas lights and decorations. A highlight was the visit to the Basilica of San Mateo (Saint Matthew) where the body of this Apostle and Evangelist is venerated by the faithful in the crypt.

While most of the pilgrims went to Florence on Friday, a few took an impromptu trip to Perugia, only about 30 minutes from Assisi. Several architectural features of the historic section of Perugia are pictured. The fountain is in the piazza of the Cathedral of San Lorenzo (Saint Lawrence), a deacon and martyr of the early Church. Also pictured is the campanile (bell tower) of the Church of San Pietro (Saint Peter) – a Benedictine community – marked by the clouds above with the cross of Saint Andrew as we arrived.

The pilgrims celebrated Mass and visited the St. Michael the Archangel Grotto and the Shrine of Padre Pio.

Loreto, Shrine of the Holy House

The pilgrims traveled to Loreto, Shrine of the Holy House and celebrated Mass. Next up will be the Shrine of Padre Pio.

We have traveled through Florence “the Renaissance City” while visiting The Cathedral of Santa Maria del Fiore and the Baptistery Doors and later went across the Apennine Mountains.

Some Pictures from Assisi, Italy

Some pictures from our day in Assisi. Check back later for new updates.

Pictured is the Casa Santa Maria in Rome where American priests on graduate studies live, including Msgr. Souckar when he was a student there in 1996-1998 and 2010-2011. Msgr. Souckar and Fr. Bryan visited the Casa Santa Maria on Wednesday afternoon and stopped in the rare book room of the library where Monsignor did some of his research for his doctorate in canon law.

Dolce (dessert) is served at the conclusion of the pilgrims’ first dinner in Rome  We’ll be sure to walk off the calories! 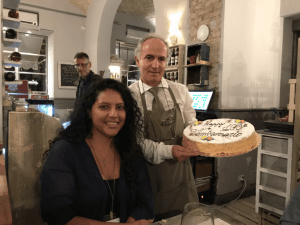 Our first day in Rome: we were able to relax for a few hours at the Crown Royale hotel before we reunited for cocktails and our first authentic Italian dinner at La Locanda di Pietro. (Translated: Peter’s Place). Tomorrow will be Assisi!

The pilgrims are on their way! Follow us on our journey and check back later to see the latest!